We always smile when we hear comments such as these…that moment when children recognise that the games they have devised – with rules, scoring systems and strategies – are being played by children in other schools around the UK.

Following a Twitter conversation between Kimberley Sutton from AussieED, Buzz Burman from Night Zoopeeper and ourselves, it seems that we may soon be hearing the opening exclamation with Australian accents. The thought of matches played between the ‘Tagtiv8 Tigers’ and the ‘Time Travelling Elephants’ is awesome. 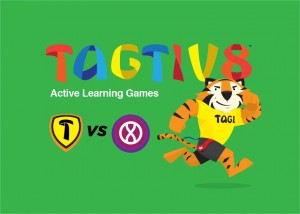 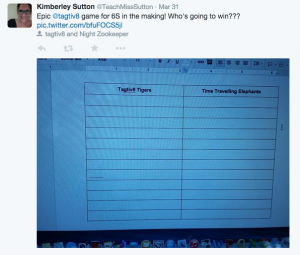 It is great when we are invited into the growing community of Tagtiv8 schools to meet the Learners and trial their ideas. One such example was provided by Greengates Primary School last year, where Catherine Odor had helped create ‘Tags in Trees’. In this game, the Learners fastened their velcro belts around the trees. The Learners were split into 2 teams, with the ‘Reds’ hiding their even number Tags and the ‘Yellows’ doing likewise with their odd number Tags. Once the Tags were hidden, the class were split into smaller teams, each with the challenge of finding their multiples. Strategy came into play when the Team seeking their multiples of 2 realised that the Teams seeking multiples of 4 and 8 were in competition with them; likewise the Learners seeking multiples of 3 and 6. During the plenary session, one Leaner exclaimed, “Miss…there’s still some Tags in the trees!” What followed was a great class discussion about prime numbers, far more active and animated than would have happened in the classroom. For details of the day, click here.

We were pleased to be invited back to Greengates Primary School by the Headteacher, Andy Gaunt, who was keen to share other Tagtiv8 games that his staff had created as part of their ‘MathsFunDay’. Our initial thoughts that the staff were reminiscent of christmas trees were soon replaced by observations that smiles, activity and discussion were being demonstrated in equal measure. 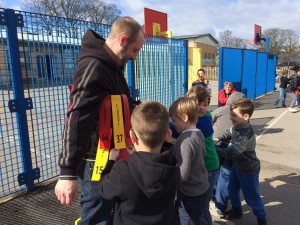 This game clearly demonstrated it had met the aims of all our games. What we seek are 3 outcomes – that Learners leave the games with:

This week, we were emailed images and ideas from Chris Lincoln, Regional PE Co-ordinator for EvolveSI, who had been delivering a maths lesson with Ellie McDonald, a teacher at Holbeach Primary Academy. A lesson involving Tagtiv8 to demonstrate understanding of Roman numerals has thus been born, linking it to the Year 4 statutory section of the Mathematics National Curriculum*. 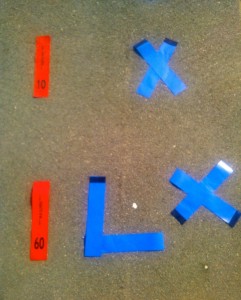 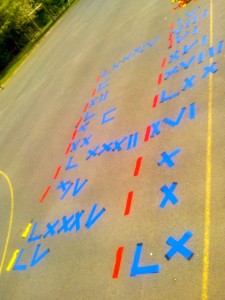 The following day we were sent a tweet from Queensway Primary School, which included the intriguing image below. The Twitter conversation that followed indicated that Tagtiv8 was being used successfully in Key Stage 1 to help embed the understanding of rounding to the nearest 10. 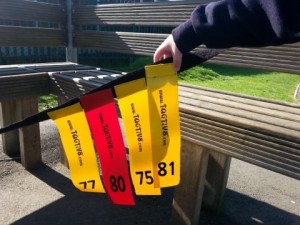 Needless to say, the Learners from Greengates PS, Queensway PS and Holbeach PA will soon find their ideas included in our ever expanding portfolio of session planning and then shared around the world. Pretty soon, they will be able to say,

“Sir…they’re playing OUR games in Australia!”

We are too well aware that in some schools, creativity can be lost in the drive to improve standards, focussing only on preparations for tests in English and Mathematics. Luckily, for many schools, organisations and individuals, creativity remains at the core. We love seeing the impact of ideas such as Caine’s Arcade and listening to the wise words of  Sir Ken Robinson.

Thanks again to all the schools who have helped create and share their ideas and games. Hopefully, these games will promote and develop ‘Active Learning’ so that it continues to grow in other schools too…