Where do our Ideas Originate? Devising and Developing New Games

Like us, many of you will have seen the ‘viral’ video clip of the children playing ‘Noughts and Crosses’ in a PE session with hoops and bibs. Since then, we have been inundated with people asking for Tagtiv8 to begin developing our own versions.

So, as a result of Research and Development with 3 primary schools, we are now ready to go with yet more Active Learning games for Maths and English. Not only do we have ‘Xs & 0s’ for numbers and words, we also have ‘Xs & 0s – XTREME!’ Like Game of Thrones and The Hunger Games, strategy is involved, but there is far less bloodshed.

In this case, when we say Research and Development, we refer to play and creativity. The children at Langham Village Primary School, Brudenell Primary School and Westerton Primary Academy took the original idea and refined it further, developing games with twists and further ideas of their own. 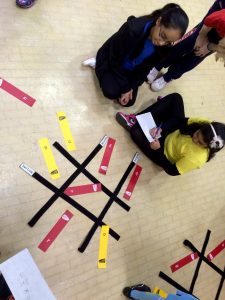 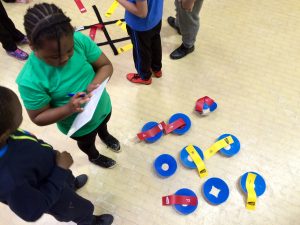 What did we Notice?

Stepping back and watching the learners take a lead on the development was wonderful to behold. The way they discussed and reasoned what would work and what wouldn’t was inspiring. The collaboration involved a few minor fall-outs, but that’s what happens in life. It’s at times like this when we smile…when teachers can see their children engaged, animated and truly learning.

Thanks to all three schools, the teachers and their learners. You ‘Get It…’

This process is part of our mission statement – for learners to create games for learners. We believe that children’s creativity knows no bounds and as such, their ideas could be described as bonkers. Even so, they work and children get excited to see their games being played by children in other parts of the world.

To find out more, just reach out.

This website uses cookies to improve your experience while you navigate through the website. Out of these, the cookies that are categorized as necessary are stored on your browser as they are essential for the working of basic functionalities of the website. We also use third-party cookies that help us analyze and understand how you use this website. These cookies will be stored in your browser only with your consent. You also have the option to opt-out of these cookies. But opting out of some of these cookies may affect your browsing experience.
Necessary Always Enabled

Performance cookies are used to understand and analyze the key performance indexes of the website which helps in delivering a better user experience for the visitors.

Analytical cookies are used to understand how visitors interact with the website. These cookies help provide information on metrics the number of visitors, bounce rate, traffic source, etc.

Advertisement cookies are used to provide visitors with relevant ads and marketing campaigns. These cookies track visitors across websites and collect information to provide customized ads.

Other uncategorized cookies are those that are being analyzed and have not been classified into a category as yet.