As a primary teacher, I often wondered, “Do we realise the potential of  student led learning? Can we take the role of ‘Play Leader’ into other areas? What happens when we create opportunities for children to work across age ranges?” As Nick Jackson often reminds us, “It’s not just about Student Voice – it’s about Student Action!”

Setting up for the day, I heard the words of the Mr. Bergh, Year 6 Maths Lead: “Bryn – this is Verity. She’ll be helping you with your sessions today.” Step forward a Year 7 student from a different school. Owing to the differences between school holidays, Verity was free to ‘help out’ in her Mum’s school for the day.

My initial thoughts were: “Great! She can help collate the tags at the end of each session and help set up for the subsequent session.” With seven 45 minute sessions back to back, today was always going to be a tight schedule.

During the first session, the Year 6 group formed themselves into a circle and introductions were made. I explained the purpose of the session – to make Mathematics active, fun and relevant – aware that Verity was listening as avidly as the Year 6 students. Once the physical activities started, she simply joined in. When it came to the Thinking Challenges, I noticed Verity working with a group – but in a self-designated teaching role. It was obvious that she had the respect of the children, even though she was only a year older. Listening to her, I was aware that she was intuitively asking a range of  questions appropriate to the needs and abilities of the children.

During the second session, the introductions were done in more of an improvised dialogue between Verity and myself. This then became the norm for the subsequent sessions. By the time we arrived at the third session, Verity was able to explain the rules for the Physical Challenge with little input from myself. She had the audience in the palm of her hand – they listened carefully to every word. 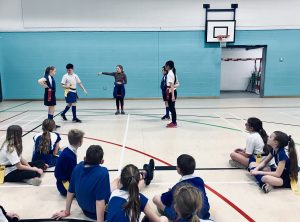 One of the Thinking Challenges – ‘Active Algebra’ – involved teams creating algebraic equations for others to solve. It soon became obvious that Verity was in her element – supporting those who needed it, while sharing the excitement of those who were enumerating possibilities of combinations of 2 variables! 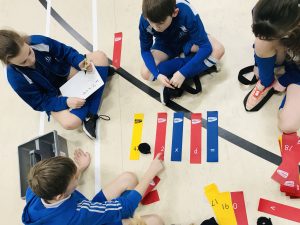 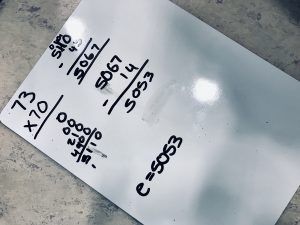 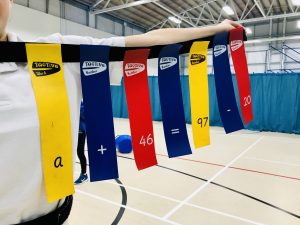 It was obvious that this particular Year 7 student could easily empathise with her slightly younger peers. Her communication skills were wonderful – including humour to motivate them into tidying up!

Watching Verity reminded me of a previous session in another school, whereby older children had taken the lead in helping the learning of younger children. As Tagtiv8 schools already realise, many of our ‘Move & Learn’ games are created by children – with some guidance from the teachers. By giving children opportunities to create, something magical happens. Combining creativity with cross-phase learning adds yet another dimension.

Thank you to Verity, her Mum and the amazing Henlow CE Primary Academy for reminding me of the possibilities and potential of a better way of learning.