As you will know, Tagtiv8 was founded by a teacher and school leader, but we left our traditional roles to bring about changes on a bigger scale. We make inroads by working & playing with schools, while researching the impacts of  Physically Active Learning (PAL). We also seek to influence the decision makers. As members of the NAHT, we are able to propose motions at national conference. 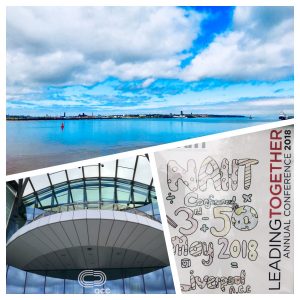 What Happened at the NAHT Annual Conference in Liverpool?

This year we set about proposing a motion with Ian Holmes, Headteacher at Thorner Primary School in Leeds. With the support of the Bradford branch of the NAHT and the Executive Committee, we were able to formulate the wording:

Conference notes the growing body of research showing children who are physically fit are better at absorbing and retaining new information. Conference asks National Executive to signpost such research to members and to explore how schools can best be supported to make physically active learning an integral part of a school’s approach to teaching and learning.

The proposal was voted on. 6% abstained but 90% agreed, meaning the motion was carried with a large majority. In other words, 9 out of 10 school leaders believe they should be signposting their colleagues towards research into PAL!

Needless to say, we were rather happy with the outcome in Liverpool. This would not have happened 12 months ago. There is a shift – a movement in the right direction. More people are beginning to stand up and take notice of the overwhelming research that PAL impacts on standards in education as well as impacting positively on health. We hope the NAHT members can now influence their own schools as well as Government ministers and policy makers.

What did the Media Say? What was their Influence? 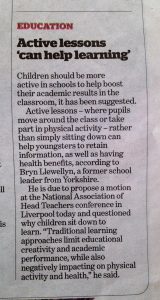 The media coverage was an interesting mix. We loved the article by Eleanor Busby in the Independent. At the other end of the scale was the Telegraph with their rather mischievous headline, ‘Let Children Run Around in Class, Headteachers Told’. Needless to say, this was not what was proposed at all. To find out more, read the blog post by Andy Daly-Smith here.

If any NAHT members would like to find out more about the research or practical ideas, just reach out.

Huge thanks to Simon Smith, Headteacher at East Whitby Academy for seconding the motion proposal.